Bournemouth pier started life as 100ft wooden jetty in 1856, primarily for steamers and fishermen. After suffering storm damage, it was re-built as pier in 1880. Since then, it has been added to and extended to become the structure we recognise today. With the addition of a theatre in the 1960s, visiting the ‘end of the pier show’ became an essential part of many a seaside holiday. By the 1970’s, though, the pier was starting to corrode and had to be re-built. 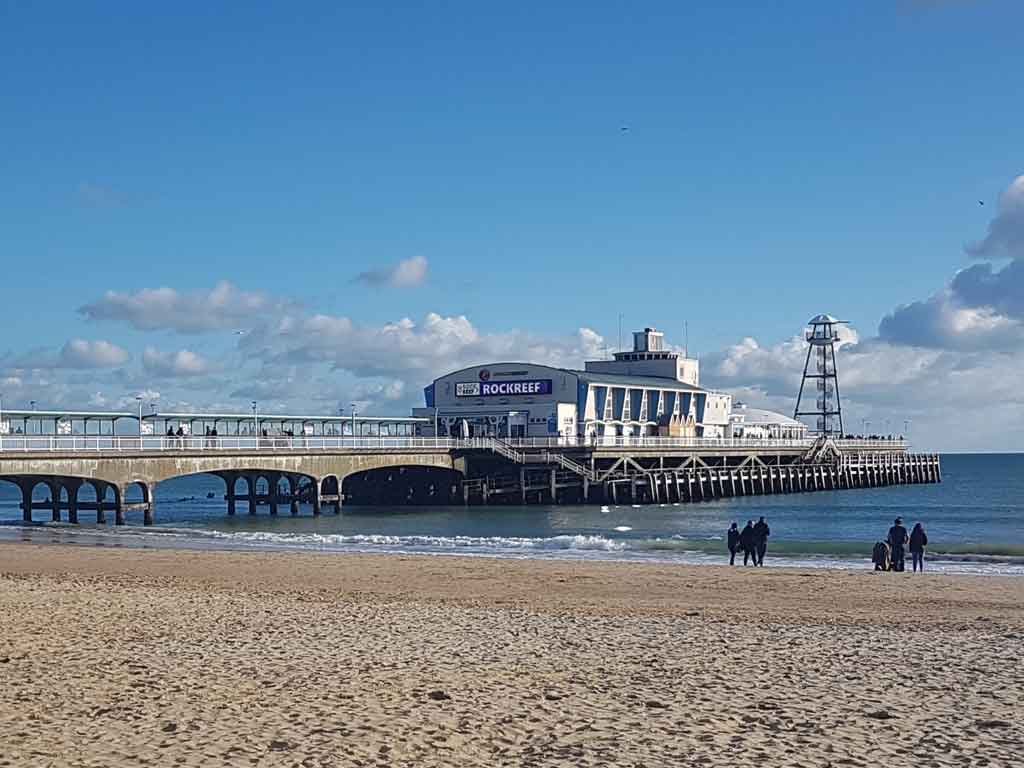 With the demise of steamers, and a change in holiday tastes, our beloved pier needed to move with the times to survive. The pier theatre was replaced by an indoor rock climbing facility. For those even braver in nature, you can now descend from the end of the pier to the beach on a zip-wire.

There is still something rather lovely about strolling along, catching a glimpse of the sea below through the gaps in the wood: Do hold on to your hat as you reach the end and lose the protection of the wind shelters, though…

The pier approach area has recently been updated. With a modern café, the Tourist Information office and an interactive water feature, it’s a pleasant place to while away a few hours. The outdoor events space, on the site of the old swimming baths, has mix of music and sporting activities throughout the year.

NAVIGATION: We have included the option to browse around the beach area using Google Street View where this is possible. There are some areas on the promenade where the Google Street View vehicles have not obtained any suitable images and they will appear below as a black rectangle. If you are lucky and there are images from Street View below then this can be navigate in the usual methods.

Below the Street View Area is a Google Map view of the Area that you are currently viewing with Street Map. You can Open Street View in Full Screen by clicking the square in the top right hand side of the image

TABS: Below you can find dynamic information about the beach hut area in Bournemouth that you plan to visit. We have information detailing the activities that you could be looking to participate in. We also list the facilities that are in the beach hut area that you plan to visit. Find out the type of beach and if there is a lifeguard presence. If you are looking to visit the beach from out of Area we have included the Digital Latitude and Longitude for your Satellite Navigation. Check out the Local Weather Forecast. Beach Tide Times and water quality.